I spent 10 years focusing on music and songwriting. I toured, recorded, and had the time of my life.

I stopped when the love seemed to get lost in all the business of it.

The love has come back & music is flowing again.

My friend Julie Flanders wrote this bio for me because I find it is just darn hard to write one for yourself. I did add a few recent tidbits towards the end…

Gabrielle’s songs reflect her unique voice and individuality as well as the richness of early influences ranging from Joni Mitchell, Delta Blues & Bob Dylan. A powerful vocalist as well as a songwriter, Gabrielle began sparkling to audience attention in 1996 when she was asked to front the NYC popular blues cover-band, Blooze Junction, which featured a 7-piece backup band and a large NYC following.

In 1998 she started her own original music project and all the pieces came together. That year, her song “Line of Your Leg” (dreamtown) won the Spree National Songwriting Contest and “Threw It All Away” (dreamtown) took an honorable mention in the Great American Songwriting Contest. In 2000, she self-produced her debut release  “dreamtown” which received critical acclaim and was voted the 3rd best unsigned CD of the year by Music Connection Magazine. Gabrielle toured the east coast playing in clubs, colleges and music festivals. She was a featured artist at the 2001 Bethlehem New Musik Festival, the National Academy of Popular Music’s 38th Songwriter’s Hall of Fame showcase and a featured solo performer at the 2001 Nashville New Music Conference (among others).

2002 brought the release of a solo live EP “Live and On Her Own” which found itself on the airwaves of acoustic music shows, college radio, NPR as well as several internet radio stations. Gabrielle started experimenting with new musicians and formed a trio with Nicholas D’Amato (Poppa Chubby, Spiraling) on bass and John Clancy (Billy Porter, Danielia Cotton) on drumcussion. With these new musician’s backing her up a new sound evolved along with a songwriting surge.

Clancy, Nick and Gabrielle hit the studio in June of 2004 and a new recording began which elicited comparisons to Peter Gabriel and Patty Griffin drawing comment for its deep emotional authenticity and strikingly beautiful musical arrangements.

In 2005 Gabrielle, self released her second studio album, “Wide” at the end of 2005, a collection of original lyric driven songs surrounded by an eclectic mix of world beats and fresh rhythmic textures with intoxicating hints of folk, rock and blues. Since WIDE was sent off into the great big world Gabrielle won the bronze in the Festival International song writing contest for best original pop song and “Neptune” received an honorable mention in the Positive Pop Song contest.  She has had songs featured on FX’s starved, and A&E’s DOG the Bounty Hunter. She was a featured artist at the Millennium Music Conference, the Dewey Beach Music Festival, Oswego Music Festival, among others.  “She Smiles” was placed on the international release of “Females on Fire II”,  “Tell Me” was placed as a featured track on the international release of “Protest Songs for a Better World”, and she contributed an original interpretation of an October Project song for “Covered” which was released in 2007.

Gabrielle kept writing pretty regularly until 2010, and received some accolades with un-released songs such as “Stay” which took an honorable mention in the 2006 Billboard songwriting contest & won the International Songs for Peace contest in 2008.

Like one of her main influences, Joni Mitchell, Gabrielle is a visual artist, and has alternated her exploration of music with painting and sculpture. She continues to bridge the worlds of music and visual arts, and has been acknowledged not only for her fine arts, but also for her extraordinary CD packaging for other indie musical artists.

Gabrielle took a long hiatus from music, moved to Colorado with her husband, David Serrano (the surrealist painter), and focused on her first passion, clay (now you know where the mud in mud music comes from.) Besides her design business, Insdie Wide, she currently teaches pottery up in the front range in Gilpin County, CO and sells her ceramic creations on her clay site, gabart.co

Music is flowing again, songs are being written, gigs are being booked and the journey continues.

the flyer for my very first solo show in 1986 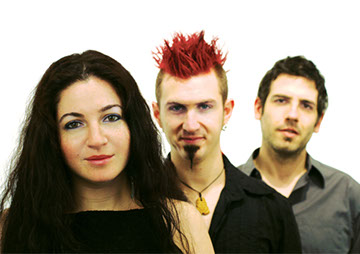 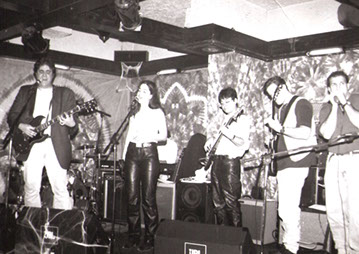 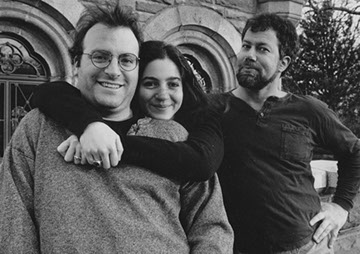